Cattle Call, developer of such games as Metal Max 3 and Space Invaders Get Even, is working on a unique new 3DS simulation game for Namco Bandai. Titled Brave Company, the new game is revealed on the pages of this week's Famitsu.

In Brave Company, you play as the CEO of a hero dispatch agency. You'll have to interview potential heroes, hire them, and send them out to the city to protect the peace. As you advance in the game, both your company and the city will grow.

Hero types include knights, archers, priests and wizards. If you send out a hero that's better suited to a particular quest, you'll have a better chance of success.

A 3DS release is set for October 27. An iOS version is also due in August.
Klicken, um alles anzuzeigen... 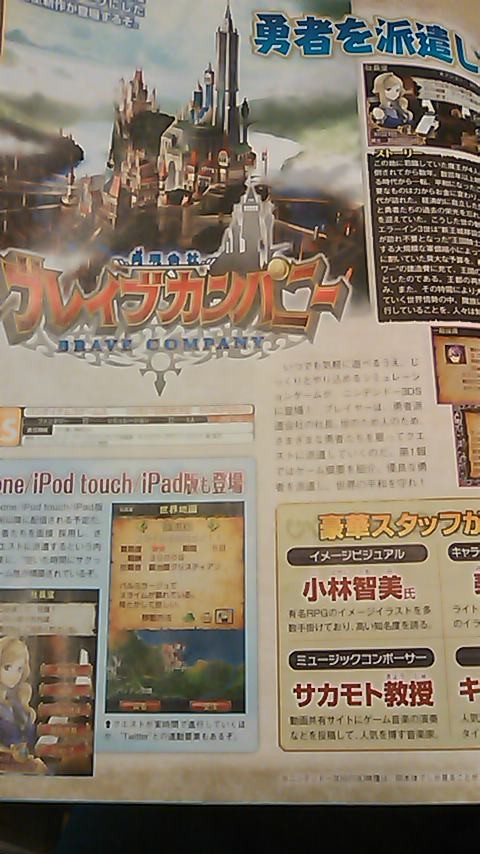 Wohl sowas ala My Life as King für WiiWare.
S

- game is set on an island which has existed in peace for many tens of years following the defeat of the demon king
- the demons have returned to try and put together another plan to take over the world
- play as the CEO of a company out to find heroes
- receive resumes from potential hero candidates
- conduct interviews
- form contracts
- depending on the hero's experience level, the contract cost may go higher
- Hero types include knights, priests, wizards, and archers
- 10 jobs in all
- heroes earn rewards when they complete a quest
- battle duty quests involve fighting monsters
- search duty has you finding treasure
- 100 quests in all
- earn money to build up your office and the town around you
- 3D for battle scenes, SpotPass support, and camera support for creating custom heroes
Klicken, um alles anzuzeigen...